Perseids 2017. Bolides over the OAJ 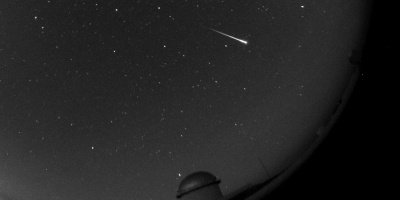 Bolide captured by the All-Sky camera at the OAJ (cropped image) on the night of the 27th of July been part of the Perseids. The dome of JST/T250 can be seen as well.

The Perseids take place every year in August, when the Earth approaches the orbit of the Swift-Tuttle comet. The meteor shower that is observed is originated by the debris particles ejected by the comet during its previous approximation to the Sun. These meteoroids create luminous trails on the night sky when they disintegrate at the high atmosphere. If the particles are larger, they produce longer and more luminous trails that, depending on their brightness, are called bolides. The maximum activity is expected for the night of 12th of August this year, and the maximum meteor rate is foreseen to be 100 per hour. The decreasing Moon it's going to spoil the show a bit, that will have its peak from 1 am on. During a month around the above-mentioned date, one can see meteors belonging to that debris cloud, as we have already noted at the Observatorio Astrofísico de Javalambre (OAJ).

Among the facilities of the Observatory, there is an All-Sky camera providing images of the whole sky down to the ground. The images it takes are used by the Operators and Technical Astronomers to monitor the ambient conditions of the night in real-time. The ASTMON instrument, with a narrower field of view compared to that of the All-Sky, complies similar purposes. But besides that, they give other valuable information. For instance, since May 2017 CEFCA is collaborating with the Spanish Photographic Meteor Network (SPMN, http://www.spmn.uji.es) reporting bolides detected with those instruments at the OAJ. Together with the detections reported by other nodes spread throughout Spain, the SPMN determines their origin. On the night of 27th of July we reported a bolide over the OAJ that has been attributed to be remnants of the Swift-Tuttle comet by the SPMN. So, the Perseids have already started more than a week ago at the OAJ.

The most recent approach of the Swift-Tuttle occurred in 1992. It takes around 133 years to complete a single orbit. Nowadays, the comet is very far away from the Earth and is getting even further away on its travel. Next visit of the Swift-Tuttle is expected to happen in July 2126.