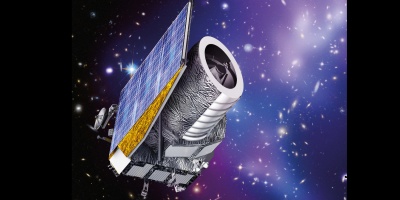 Overview of the spacecraft. This artist impression is based on the CAD drawings by Thales Alenia Space, Italy and Airbus Defence and Space, France. Credit: ESA

A collaboration agreement between the Euclid Consortium of the European Space Agency (ESA)-led space mission Euclid- and the Centro de Estudios de Física del Cosmos de Aragón (CEFCA; Teruel) has been signed for the provision of ground based scientific data with the Observatorio Astrofísico de Javalambre to complement the observations of the Euclid space telescope.

Through the agreement, CEFCA becomes an official leading node of the Euclid's Ground Segment OU-EXT Organisation Unit and its scientific personal can register as full member of the Euclid Consortium in order to have full access to the scientific data of the mission, which has been designed to understand the origin of Universe's accelerating expansion.

"Our participation as a ground segment of the Euclid mission is of great importance for CEFCA because it adds value to the scientific activity of the center in a very effective, natural and complementary manner, provided that Euclid and CEFCA share many similarities in their scientific goals and analysis techniques.” said Prof. Mariano Moles, CEFCA's Founding Director.

The Euclid space telescope will be launched in 2020 and for six years will map the shape, brightness and 3D distribution of two billion galaxies, exploring how the Universe evolved over the past 10 billion years while covering more than a third of the whole sky.

The mission dataset will be useful to study the nature and properties of dark matter and dark energy and their role in the evolution of Universe. “The mission will investigate the distance-redshift relationship and the evolution of cosmic structures by measuring the redshifts and shapes of galaxies and clusters of galaxies to a look back time of three-quarters of the history of the Universe. This way, Euclid will cover the period in which we believe that the dark energy had an important role in accelerating the expansion”, explains Dr. Yannick Mellier, the Euclid Consortium lead.

The agreement with CEFCA comes few months after Euclid Consortium's first contacts to explore the possibility for the Spanish Unique Scientific and Technical Infrastructure (ICTS) Observatorio Astrofísico de Javalambre to provide complementary ground based data required to complete the mission.

“Euclid mission combines data obtained from space and ground based telescopes. The space telescope will observe the sky in the infrared and the ground based telescopes in the optical.” explains Dr. Mellier. “The combination of these data is key to derive the distance measurements of lensed galaxies that will be used to make a map of dark matter and measure the dark energy”, said.

The 2.5 m JST/T250 telescope of the Observatorio Astrofísico de Javalambre will survey 5000 deg2 of the sky for the mission. This is, totally, around 110 observing nights before 2024.

“The OAJ providing ground-based data for Euclid is a recognition for the worldwide uniqueness of the JST/T250 telescope and its panoramic camera, JPCam, as a state of the art installation to conduct astronomical surveys. As a matter of fact, only a few telescopes in the northern hemisphere have the capabilities to provide on time the large amount of data required by the Euclid mission”, said Prof. Moles.

The scientific data of JST/T250 will join those provided by the 3.6m Canada-France-Hawaii-Telescope placed at Mauna Kea Observatory, in Hawaii.

After the signature of the agreement, CEFCA joins the biggest international astronomical collaboration in history, with more than 1400 scientists from over 130 institutes and a nominal budget of 850 million euros. 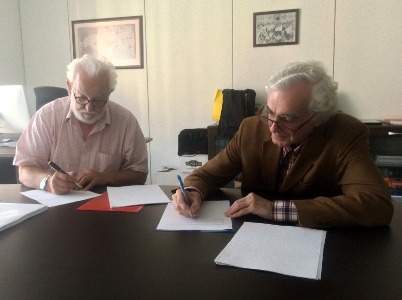