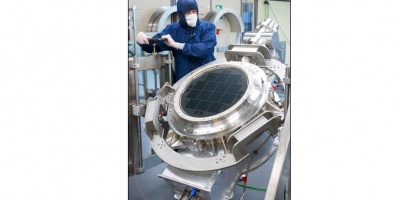 JPCam's cryogenic camera at e2v's clean room during the final acceptance review of the system.

After passing the verification tests, the cryogenic camera is being prepared to be delivered at CEFCA next August.

In late June, several members of CEFCA visited the headquarters of e2V Technologies (Chelmsford,UK) to carry out the final acceptance of JPCam's cryogenic camera, the scientific instrument designed by CEFCA and Brazil for the JST/T250 telescope. After two weeks of extensive verification tests of the performance and capabilities of the system, the excellent results have given green light for its delivery to the OAJ.

The cryogenic camera manufactured by e2v is the most sophisticated part of the JPCam scientific instrument. It comprises the cryostat, the cooling and high vacuum systems and the JPCam focal plane, which includes a mosaic of 14 large format as well as the control electronics, with 224 channels. JPCam will be one of the biggest digital cameras worldwide, with 1,200 million pixels.

The acceptance tests were focused in read out noise tests in the different operational modes of the cryogenic camera, verification of the high vacuum levels and cooling and control of temperature tests of the liquid nitrogen cryogenic system.

During the visit, CEFCA personnel also received specialised training in the operation and maintenance of the instrument that will pass into their hands soon.

The camera will be delivered to the OAJ by the end of August. On arrival, integration and start up at the clean room of the observatory will be carried out to verify the performance and fine-tune the system after the trip. Afterwards, the camera will be assembled with the mechanical part of JPCam, that includes the actuator system and the filter and shutter unit, and will be integrated at the telescope for the final commisioning phase.